Build 100 - 23. June 2022Save button functionality addedThe Save function becomes available after a change has been made in the sceneThe Save function is also used to set the starting point of the scene to the user's current locationSuccesful saving is indicated by a beep and the green save iconThe Save function is currently not yet available in Multiuser and during Model ViewImproved Share-ID experienceGuests can display their name when accessing a scene through Share-IDNames of logged-in users will be displayed automatically when accessing a scene through Share-IDRolebased access rights are retained when accessing a scene through Share-IDUI changes to the VR TabletTabled size increased by 15%Home butten and Exit button are now separatedSave button addedSettings tab allows switching between Walk and Fly mode in a sceneObject Placeholdersa placeholder box is displayed while external objects are downloadedthe box improves usability when working with large models and low internet speedthe box represents the bounding box of the loaded model, displaying the correct scale and object rotationsnapping feature has been improvedBug fixes and other changesUpdate to new version of Unity Engine 2022Support for assetBundles (opening door for Unity Headless server)Default texture quality to highFix connect button not resetting state when disconnection due to exiting the Oculus GuardianFixed missing translation keysUser Roles/Access Rights addedBetter reflection probesPost-Effects (default off) can be enabled againFixed bug caused MemoryleakRefactor of custom avatars.Fixes to user-right access managementBug fixed that could lead to unselectable objectsSave-Button should disable itself in MU and ModelViewMaterials are now correctly loading in web when saved on Quest.Skybox no longer gets deleted when saving in the SAppModelView starts by default in 1:10Build 88 - 31 March 2022Multi-User: Participant ListThe redesigned multi-user page on the Tablet UI now lists all participants in a multi-user session in real-time, including the speaking indicator icon for each participant. The page also displays feedback to the user, for example when there are no participants in the meeting. See screenshot below. Multi-User: Teleport-to-user FunctionThe participant list on the multiuser page now also provides an option for the user to jump to another participant in the session. Clicking on the teleport-to-user button, the user will land at a random position on a circle around the target avatar, at 1.5m distance from that avatar. N.b.: in this first version of this function, a user cannot yet teleport to another user participating through Webview. Multi-User: Improved establishment of connectionEstablishing and handling the connection to a multi-user session has been improved.Multi-User: Improved Avatar Name TagsThe avatar name tags now have dynamic length, depending on the length of the user name. Bugfixes for scene loadingTwo bugs at scene load that regarded missing textures and material fields have been fixed. 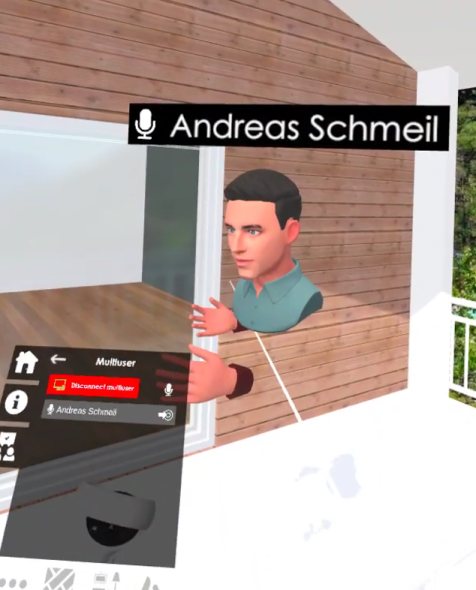 Build 77 - 17 February 2022App now available in the Meta App Lab StoreThe HEGIAS VR app is now available in Meta/Oculus' public App Lab Store. So new users can find the app in the App Lab Store (search for "hegias") and install it. Alternatively, the app can be installed on the browser via the direct link - to do this, you need to be logged in to the browser with the same Facebook/Meta account that is used in the Quest 2. Improved model viewSeveral UX problems with the model view have been addressed:When entering model view, the model now always appears in front of the user.The bug in the handling of the pedestal under the model has been solved; now it does not appear with infinite height anymore.The height of the pedestal is now limited to a maximum height.Also, the ground is now transparent, allowing the user to see through the ground when parts of the model are below. MU: Synchronized object scaleIn multiuser sessions, now also the scale of objects is synchronized in real-time. Now, all participants see the objects scaled correctly. MU: Synchronized copied objectsIn multiuser sessions, now also the duplicates of objects in the scenes are synchronized, so all participants can see them and changes to them in real-time. MU: Objects inserted during sessions are synchronized only after placementIn a multiuser session, now the objects that are inserted into the scene are synchronized only after they are placed in the scene. Up to now, they were synchronized already before, which could led to problems when the inserting user changes their mind and decides to not insert the object after all. Automated removal of objects that fall out of reachNow, objects that are thrown over the balcony or otherwise out of the scene's boundaries, are automatically removed when they fall out of reach. This saves memory, and is at the same time a new alternative way of intuitively removing objects from the scene. Improved Pico 3 supportThe port of the app to the Pico 3 Standalone VR headset has been improved, and is now available in their store. Reflections fixedA rendering problem with reflections on objects and architecture was fixed. Now, reflections look better than before, especially on objects and architecture elements made of metal. MU: App crash after MU disconnection fixedSo far, in certain conditions when the multiuser connection dropped, the app would crash. This is now fixed; the scene is closed and the user is put back into the lobby. MU: Material synchronization with special geometries fixedSo far, in the case where an architectural element had just one single mesh, synchronization of the material applied to it didn't work. This is now fixed; material synchronization should now work on all scenes.

Was this article helpful?